In the gluten-filled world we learned as children which products we liked to eat and which we didn’t. When you learn you are gluten intolerant, you find ourselves thrown into the task of finding gluten-free products to replace all those foods containing wheat, rye, barley and oats that we loved to eat–like bread, cookies, cakes and pastas. Our lives have suddenly become much more complicated. 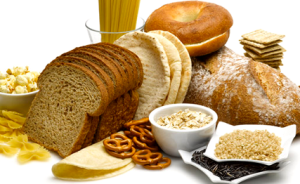 Gluten is what you would call the protein part of certain grains like wheat, barley, rye or other similar grains. Some people are found to be allergic to the gluten in these grains and so need to have a gluten free diet.

This means you should avoid anything with wheat, rye, barley or spelt. That means regular bread, pasta, cereals, cake, and biscuits are out. Seasonings and spice mixes often also contain gluten. You will also need to lay off the beer, and read labels carefully, as many processed foods have gluten in them.

Be aware that gluten-free foods are often packed with salt and sugar.

If you think you might be intolerant to gluten, then you could get yourself tested for coeliac disease. Around 1% of

the population is affected by this condition, where your immune system becomes sensitive for gliaden, a protein in gluten.

When you eat gluten your immune system will not only attack these molecules, but also the lining of your gut, causing inflammation, with common symptoms including diarrhoea, constipation and weight loss. The only real way to test for coeliac disease is to have a blood test, where doctors look for anitibodies. Alternatively, have a biopsy of your small intestine.